The transcript of the judgement in Bunting has now been shared, and that has been accompanied by plenty of legal commentary, but what does the decision actually mean for our recovery departments?

Firstly, insurers and their representatives provided evidence from dates which were unrelated to the hire period. Indeed, a clear tactic is to provide rates from during lockdown which are not representative of the true position on hire rates.

However, it is risky to critique the rates as not complying with the Stevens approach: ‘a judge faced with a range of hire rates should try to identify the rate or rates for the hire, in the claimant’s geographical area, of the type of car actually hired by the claimant on credit hire terms.’ Stating that the defendant’s rates don’t comply with this leaves you open to the judge stating that this is just ‘nit picking’.  Clearly, insurers are relying on persuading handlers that they can’t just ‘nit pick,’ to get them to accept a lower settlement offer.

The response has to be that the law has not changed, and the best evidence before the judge remains what the hire would have cost at the time of hire.  More importantly, it does not change the position on impecuniousity. If the hirer is impecunious, and you can evidence it, the commercial rate should be recoverable.

Ideally, when the hire starts, try and obtain evidence of what the local rate to the client is, as this is still the best evidence.  The key point in support of this in Bunting is at paragraph 13: ‘The real issue in this appeal is how the judge should have approached the imperfect evidence as to the basic hire rate.’

Assuming you have the rate from the date hire started, then your handlers might find it useful to respond along the lines of: ‘In the case of Bunting the claimant did not produce any alternative evidence to explain / show that the defendants’ rates were inaccurate, and expected the judge to dismiss the rates without evidence to back them up, and award the credit hire rate in full. We are not asking the judge to dismiss your rates and award the rate charged in full. Instead we have supplied evidence of the car hired from a local hire company from the day of hire to give a true reflection of what the rate would have been had the client hired the car himself, rather than using credit hire.’

Another thing to bear in mind is the number of days’ notice given to hire a vehicle for undriveable cases.  The judge in Bunting did not have before him any evidence that rates obtained from booking seven days in advance are very different from rates on the same day.  This is something you may want to bear in mind when responding to defendants’ rates arguments. 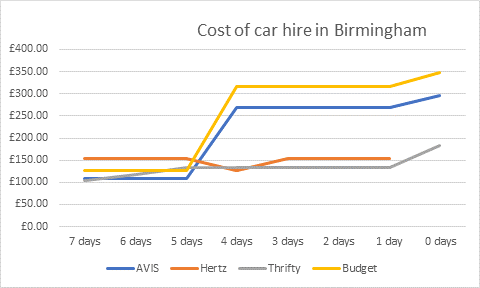 * The survey looked at the cheapest available vehicle and did not take into account any additional charges such as reducing the excess the hire company would charge in the event of a claim while in the hire car.  Hertz could not provide the vehicle researched on the day of hire, hence no result for 0 days.

Please do bear in mind that CHO does not assume responsibility for any specific member company. Our updates are for information and guidance purposes only. It is the case that each and every member company must always take their own independent advice in respect of the specific circumstances that apply to their company.